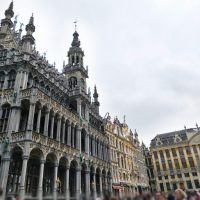 When questioned about the Russian diaspora,
or “russian-speaking minorities”, in the world, and if they sort of  had become an instrument of the Kremlin’s propaganda, among other points of view we hear these replies
first from Mr. Pomerantsev (on the right),
and Mr. Kniivilä (2nd from left).

Both take note of some previous statement by “Iliya”..